We are passionate about canine health education and Penny continually participates in seminars & conferences covering a variety of related topics. As Board Member & former Secretary of the Bouvier Health Foundation since 2014, she feels that the sharing of information is essential to the betterment of this magnificent breed.

Whether a line-bred litter or out-cross, starting with health-tested parents is essential. We make every effort to obtain health testing results for our breed stock, which include Orthopedic Foundation for Animals (OFA) certifications for hips, elbows, heart with echocardiogram, and eyes. Testing in these four areas produces a CHIC Number you can easily use to verify test status. Unfortunately, these certifications cannot guarantee the future health of your puppy, but they are a best practice to follow.

With careful attention paid to the heritage of the mating pair, we ensure the finest qualities are bred into our litters. The American Bouvier des Flandres Club (ABdFC) is responsible for the establishment of the breed standard maintained by the American Kennel Club (AKC), which can be review on either website.

Each litter is hand-raised in our house, with plenty of stimulation - freely experiencing the sights, sounds & smells of a home environment. When old enough, they are then introduced to an outside world of wonders. We are proponents of the Seven Rules of Seven...where, during their time with us, they experience a minimum of seven different surfaces, objects, locations, challenges, people, etc; which aids in socializing and developing the confident temperament typical of the breed. In addition, grooming is an essential component in the life of a Bouvier - the puppies are brushed & combed often, but we also play with toes/feet & teeth/mouth to prepare them for nail clipping and teeth maintenance - not to mention the bathing & trimming that are essential to maintain a healthy coat.

It's the culmination of every new experience in this brave new world that prepares them for their future life ahead with their forever homes!!!

Healthy, happy puppies don't just happen. It takes hours of planning and research to give a breeder the ability to rise to the challenge. 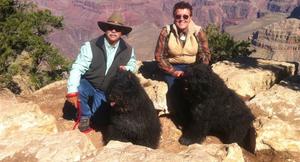 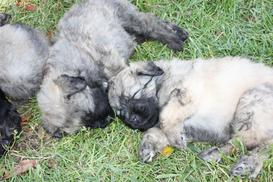 When Penny & Scott Anderson purchased their first Bouvier puppy in 1994, it was solely to add a canine companion to the household. But that idea soon changed direction when, with the great support of the puppy's breeders & many others, that first Bouvier, Rogue (Ch. Susant's Vachon du Rogue), became a multiple Best of Breed competitor and his name sake, Rogue Bouvier des Flandres, was born.

The Bouvier was originally developed as a general farm utility dog, making them adaptable to a variety of canine activities. Because of this, through the years we've been involved in conformation events - from exhibiting dogs to organizing events; trained & placed working titles on our Bouviers in obedience & herding; as well as activities in cart pulling.

In 2008, we were extremely lucky to have exhibited the #1 Bouvier bitch, Cami

Suprm GCh. AuCh. Rogue's Frontier Lady of the Outback), was the #1 Bouvier in

AuCh. Estrik Naughty by Nature) is currently the #1 Bouvier in Australia and the first

Australian-born Supreme Grand Champion Bouvier...it's rewarding for us to follow

their successes and know we had a little part to play.

We are members in good standing with a number of breed clubs, including the

Our love of the Bouvier has grown over the twenty-four+ years of our involvement. Along the way, we have developed lasting friendships - adding cherished experiences through our journey. We are devoted to the health & advancement of the Bouvier des Flandres, but more importantly, to the puppies we produce, devoted throughout the life of each puppy & beyond. It is through this love of the Bouvier that fills our life's journey with so many cherished memories.